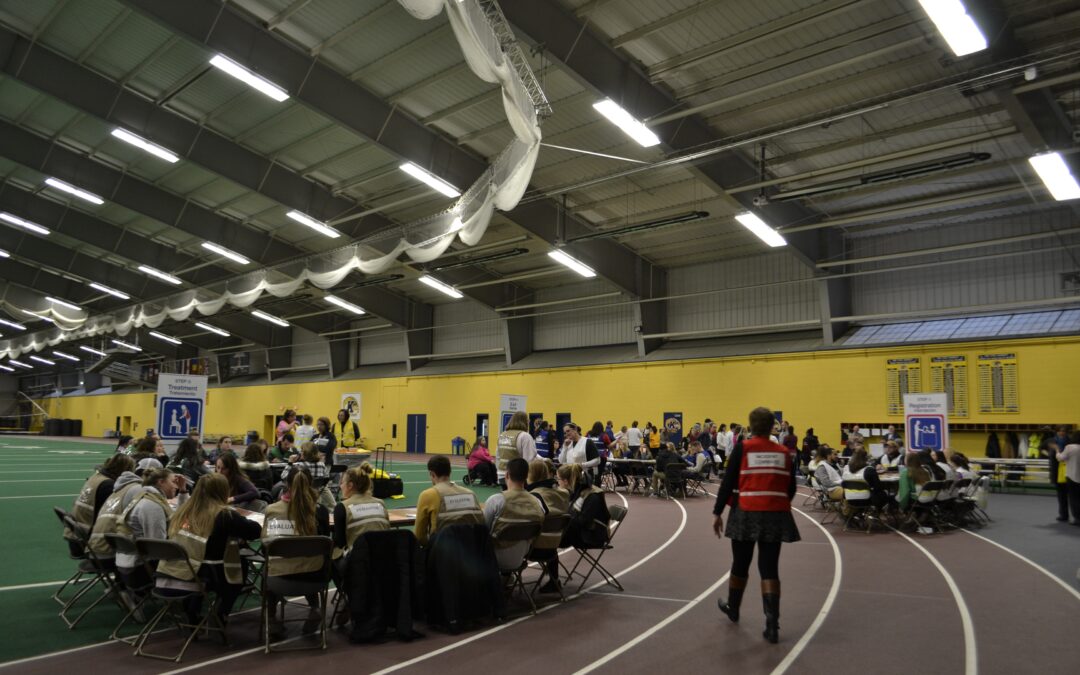 In December, more than 80 senior nursing students in Kent State University College of Nursing’s community health course had the opportunity to learn the roles of a Public Health Nurse during a simulated disaster response.  These students participated in a collaborative mock disaster simulation in collaboration with the Portage County Health Department.  This collaborative simulation is held twice a semester to help prepare Public Health Nurses for the critical role they play in disaster preparedness in a county health department. However, due to insufficient funding for Public Health Nurses, these are some of the only times the health department has an opportunity to practice and revise its county preparedness plans.

“Individuals spend most of their time out in the community or in their homes. They aren’t in the hospital long, so we should not forget about helping the community,” said Pamela Rafferty-Semon, MSN-ED, RN, and associate lecturer at Kent State University College of Nursing. “Public health nurses, the Emergency Management Agency, and other supportive agencies are hidden gems. They work behind the scenes in the community to keep people safe and healthy by getting a handle on communal and infectious diseases. People aren’t aware of their work until a disaster happens.”

Prior to the start of the simulation, Health Department staff set the stage explaining a white substance, identified as Anthrax, was present at the scene of a small explosion that took place in the Kent State Student Center. Categorized as a Category A bioterrorist agent, Anthrax, although not contagious, can be dispersed quickly and easily, thus affecting a large amount of people.

“If a person has been exposed to Anthrax, he or she requires prophylaxis, meaning that person needs to take preventative medication before symptoms of the disease develop,” said Rafferty-Semon. “This makes it an ideal simulation experience for our students because of the amount of people exposed would be large and all would need to be treated within a specific amount of time.”

Community members exposed to the substance would be instructed to visit a Point of Distribution/Dispensation (POD) for mass vaccination. In Portage County, the Kent State University Field House is one of the designated POD locations, and was also the site of last month’s simulation.

While the POD is organized by the County Health Department and Emergency Management Agency (EMA) personnel, it is staffed by volunteers. The nursing students received “just-in-time” training before executing the simulation POD, which consisted of four stations: registration, screening, treatment, and exit. Students used critical thinking and assessment skills to triage patients and move them through the POD.

Divided into groups that rotated every twenty minutes, each student had the opportunity to volunteer at each of the stations and role play a victim. The victims were provided cards that described realistic scenarios that could happen if the general Portage County community were to come through that POD. These included a panicked individual, a person who did not speak English, and a disabled individual.

In addition to the students, Michelle Thibault, MSN, RN and Stephanie Chin MA, M.Ed, BSN, RN, faculty from Maine College of Health Professions observed and participated in the POD simulation. They were the first out-of-state visiting faculty to take part in the simulation with the students. Prior simulations have been observed by faculty from Kent State University regional campuses, a Health Commissioner from Mahoning County, and Public Health Nurses from other health departments.

Thibault and Chin learned about Kent State’s POD simulation through an article published in the January 2017 Online Journal of Issues in Nursing by Kent State nursing faculty Pamela Rafferty-Semon, MSN-ED, RN, associate lecturer, Jeremy Jarzembak, MA, RN, senior lecturer, and Jennifer Shanholtzer, MSN, RNc. After speaking with Rafferty-Semon about the simulation experience, they were intrigued and wanted to see it firsthand.

“The students were well-prepared and interacted with me well. I role played the manic/bipolar patient and one specific student followed me all the way through the process,” said Thibault. “She worked one-on-one to communicate with me by answering my questions and providing additional resources. She made sure my needs were met.”

“We were impressed with the professional demeanor of the students,” said Chin. “These are students poised to graduate from [Kent State’s] program and I’d be happy to work with them as colleagues. It was consistent across the group and that’s impressive.”

Inspired by the success of Kent State’s simulation, Thibault and Chin were excited to develop their own version back in Maine.

“We would like to reach out to our local public health department about possible collaborations,” said Thibault. “Staying in contact with Kent State University College of Nursing as a mentor throughout this process is important. Additionally, Kent State might be able to learn and grow from the stuff we do.”

Once an article is published in a journal, it takes about a year for people to respond to it. Therefore, Rafferty-Semon, Jarzembak, and Shanholtzer anticipate that as more people read the article, they will be contacted by additional out-of-state facilities. Recently, faculty from a university in Connecticut reached out to express their interested in having Kent State mentor them as they create a four-hour simulation module for over 180 of their students.

“To our knowledge, no other nursing schools are running POD simulations with their students. It’s important for our students to experience this type of simulation as it’s more systematic, organizational, and population focused. It’s not just focusing on one individual,” said Rafferty-Semon. “In the clinical setting, students may take care of one or two individuals, but here they look at the population as a whole and focus on the group’s needs and health disparities by providing education and primary prevention.”