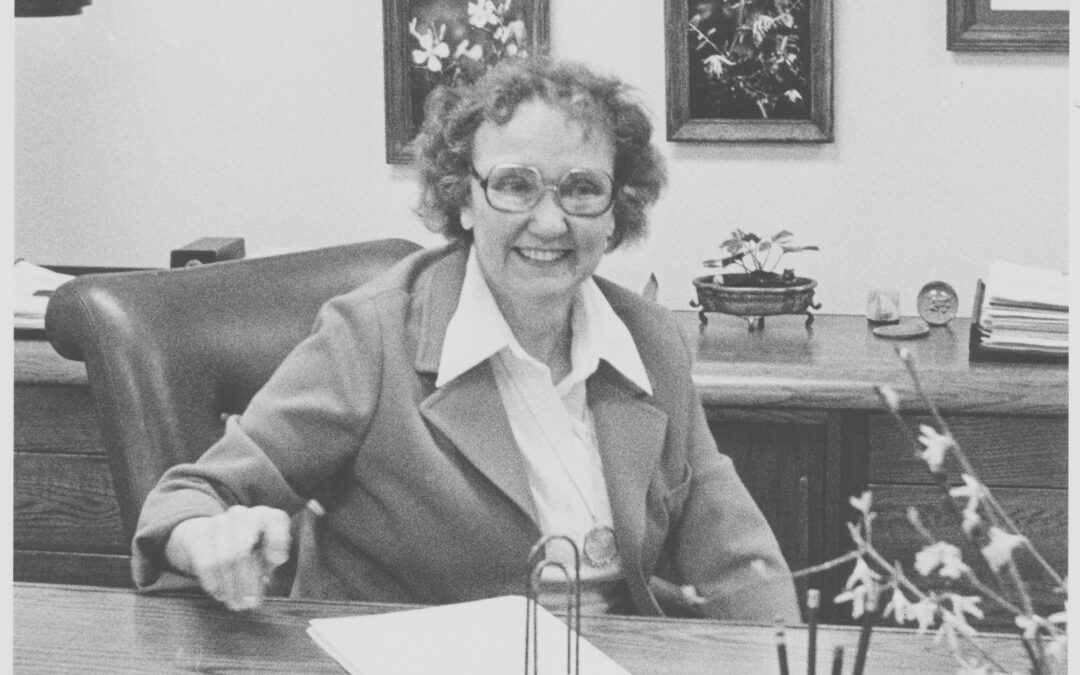 The first female dean at Kent State University was Linnea E. Henderson, Ed.D., MA, BSN, Dean of the College of Nursing, who dedicated her tenure to building the nursing program. According to faculty who knew her, “[Dean Henderson’s] vision, commitment and leadership have been the guiding force behind the [College] of Nursing and responsible for our prestigious position in nursing education,” (Semple, March 1984).

Henderson, appointed the Founding Dean of nursing in 1970, had previously served as director of the nursing baccalaureate program since 1967. She quickly rose to the challenge of convincing university science faculty that nursing was appropriate for academia. At that time, nurses had traditionally been educated in hospitals, not universities, but as Henderson pointed out, “As the American health care system has become increasingly more complex, it has become more and more important for nurses to have baccalaureate degrees. A growing number of nurses are [also] working toward master’s degrees and doctoral degrees,” (Vitek, 1979). The first nursing class had 65 students. One decade later, the nursing program would enroll nearly 700 undergraduate students, launch a master’s degree program in the fall of 1977, and for the first time have a permanent location in a new $2.5 million nursing building.

While under Henderson’s leadership, the nursing faculty grew from four members in 1967 to 60 members in 1984. The school graduated more than 1,700 students with bachelor’s degrees and 80 with master’s degrees by 1984. The Ohio Senate recognized Henderson in a resolution stating, “as a result of her strong belief in baccalaureate nursing education and her unwavering commitment to excellence, the school and its graduates have become recognized and accepted throughout the nation,” (Senate lauds Dr. Henderson, 1984).

Just like other female trailblazers, Henderson’s tenacity and dedication moved the College of Nursing forward. In 1984, then Assistant Dean Irene Bosco said, “[Dean Henderson] devoted almost all of her time to the University,” (Semple, April 1984). Remembered as a strong and passionate leader, we should not take for granted all of the challenges she overcame as she forged the foundation of her continuing legacy.

While celebrating the college’s 50th anniversary last October, former Dean Dr. Davina Gosnell (1989-2004), who served as a faculty member under Henderson, shared her memories of the Founding Dean.

Dean Henderson had very high standards but seldom appeared authoritarian in manner. She had a unique way of keeping her finger on the pulse of things happening within the college. Every Monday morning a homemade sheet cake appeared in the faculty kitchenette and everyone knew she had made it. At the start of nearly every day, we could find her sitting casually in the workroom reading the morning paper, greeting faculty as we stopped in for our mail. Dean Henderson would also periodically make rounds, and if a faculty’s office door were open, she would stop in for a chat.

Henderson served for 17 years until becoming acutely ill and passing away on April 25, 1984. Just before her death, former Kent State University President Michael Schwartz presented her with the President’s Medal for her distinguished service to the University. “Henderson’s vision, dedication and persistence have been the guiding force in the establishment of the [College] of Nursing,” the award citation said (Semple, April 1984). In a fitting tribute, Kent State University Board of Trustees renamed the nursing building, which had been built to Dean Henderson’s design specifications and opened in 1978, Linnea E. Henderson Hall after her in 1984.