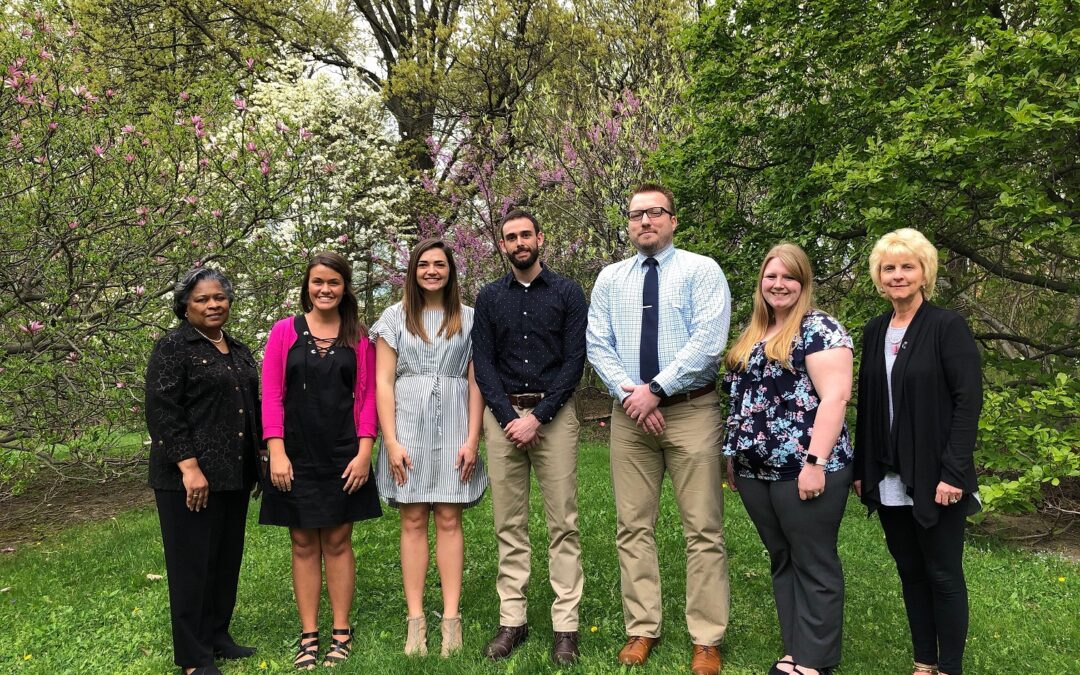 Hannah Miller, Samantha Kenney, Brian Cochran, Ryan Dowling, Paige Barnum, Kayla Norris, and Parker Henderson, who attend the Kent, Salem and Stark campuses, were among 24 northeast Ohio nursing students accepted to intern at Akron Children’s Hospital as part of the “Assuring Success with a Commitment to Enhance Nurse Diversity,” or ASCEND program. In its fourth year, the ASCEND program works with traditionally underrepresented populations within the nursing profession, such as minority groups or first-generation college students. During their summer internship, which began on Monday, May 21st, the students will work 40-hours a week on a clinical unit. Those students who successfully complete the ASCEND program requirements will receive a stipend.

The ASCEND program focuses on building communication skills, professional development, and therapeutic relationship skills. Each student is paired with a registered nurse mentor who encourages observation and participation in interdisciplinary communication, patient and family education and therapeutic interactions.

“Students in the ASCEND Program have a unique opportunity to spend over 300 hours in a clinical pediatric setting with nurse mentors. Nursing school clinical rotations typically do not allow for students to see a shift from start to finish, and the internship provides the opportunity to see patient care throughout the entire shift,” said Dorrington. “Because the internship focuses on communication skills and therapeutic relationship skills, the interns are able to observe and participate in other very important aspects of nursing that may be minimized in the clinical rotation setting.”

In order to be eligible to participate in the ASCEND program, the nursing students had to be in good standing with the Kent State baccalaureate program, completed his or her junior year of nursing school, and belong to an underrepresented group in nursing, including ethnic/minority backgrounds, males, or first-generation college students.

“Many of my aunts, uncles, and cousins are still Amish and I’ve had the opportunity to learn about the genetic conditions in the Amish Community through an honors experience at the New Leaf Clinic in Mt. Eaton, Ohio,” said Miller. “It is my hope that I can help make the healthcare experience more enjoyable and less frightening for Amish patients at Akron Children’s Hospital.”

Miller is working in the Pediatric Intensive Care Unit (PICU), where patients are critically ill and may be hospitalized for extended periods of time. She is developing relationships with the patients and their families, and she enjoys being a small part of their journey.

“Students accepted into this competitive program have an opportunity to learn from experts in pediatric healthcare. This is an exceptional opportunity for clinical education for students interested in pediatrics,” said College of Nursing Dean Barbara Broome, Ph.D., RN, FAAN. “Akron Children’s Hospital is a leader in pediatric healthcare and Kent State University College of Nursing is proud to be a partner in preparing the next generation of health care providers.”

Brian Cochran, from Columbiana, OH, dreamt of becoming a nurse because he felt called to help people at their most venerable times. Cocharan, who wanted to experience a fast pace environment and the challenge of thinking quickly, is working in the Akron Children’s Emergency Room.

“The ASCEND program is important to me as a future nurse because not only will it allow me to build skills in areas such as communication and thinking on the run, but I will also get to see many different situations I have never experienced before,” said Cochran. “After graduation, my dream job is to work on a pediatric oncology unit.  That is my calling and I would love the opportunity to one day help those children.”

Including this year’s seven students, a total of 21 Kent State students will have participated in Akron Children Hospital’s ASCEND program. To date, eight of those Kent State ASCEND alumni have or will be working at Akron Children’s Hospital as registered nurses.

“Because the ASCEND program provides clinical internship and professional development to nursing students who belong to traditionally underrepresented groups in the nursing profession, this initiative is one of the ways Akron Children’s Hospital is addressing the importance of supporting future nursing while promoting diversity and inclusion in our nursing workforce,” said Dorrington.