Focus on What’s Ahead 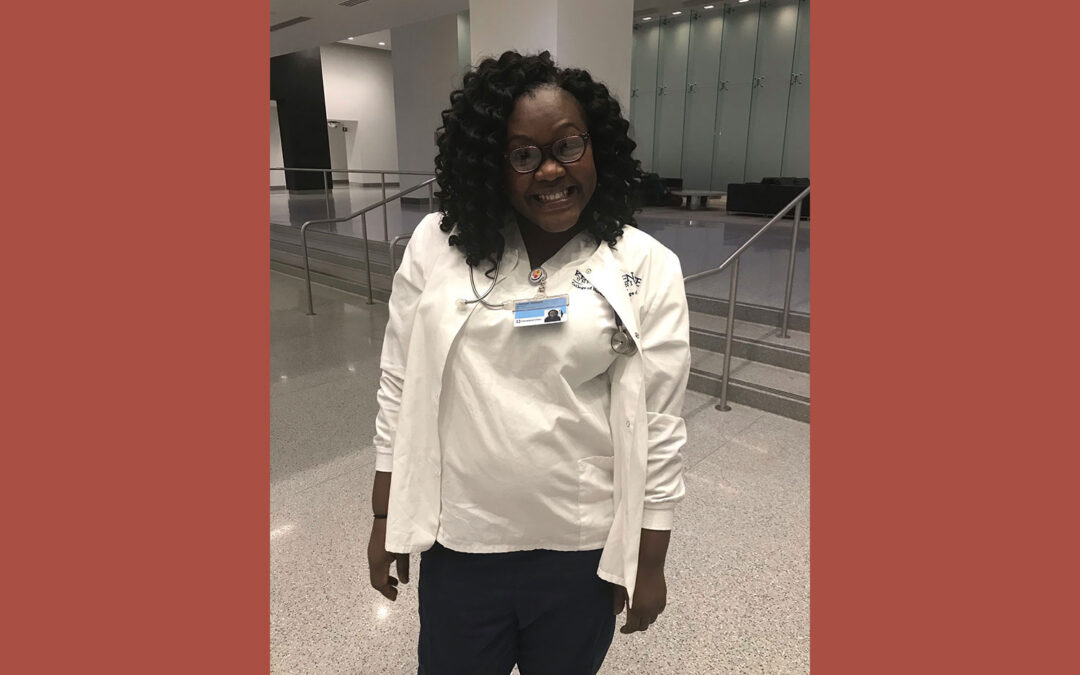 It was only after experiencing a personal health scare did Hannah Amissah find herself considering a career in nursing. “Following my surgery, my nurses were so compassionate. They spent more time with me than any of the other medical professionals.” Through research, Hannah learned of countless opportunities for nurses beyond the bedside. Having recently moved to Ohio to be closer to her family during her first pregnancy, Hannah searched for nursing schools within the state. After reading about Kent State College of Nursing’s accelerated bachelor of nursing program (ABSN) and speaking with an advisor, she applied.

Growing up, Hannah’s family always believed she would go into medicine. She, however, initially found herself drawn to the pharmaceutical profession. Born in Ghana and raised in London, England, Hannah majored in biology and minored in chemistry at Howard University in Washington D.C. Excited to accept a position working at a pharmacy following graduation, Hannah was surprised to discover she disliked the job. “I wanted something more hands-on, with more patient interaction than counting medications or constantly being on the phone. I wanted something more personal.”

Hannah began her nursing journey in fall 2017 and will be graduating in May 2019. Looking back on her experiences at Kent State, she described her time in the ABSN program as a great experience. “All of us within the program have become one big family and we help each other out. We’ve had some great nurses and instructors who have helped us with our education in the clinical experience.” Nursing school, however, has not come without its challenges. For Hannah, one of the hardest challenges has been the commute. Every Friday she drives two hours from Columbus, OH, to Kent State for class. “Our clinicals are on Saturdays, so most of the time I’ll stay in hotels, Air B&Bs or with friends in the program.” Other times Hannah will drive straight to Cleveland, leaving her home as early as 4:00 a.m. to make it on time to Cleveland Clinic for early morning clinicals.

Additionally, having felt stretched too thin by work, motherhood, and school, Hannah resigned from her full-time job during her second semester in order to become a full-time student and focus on her educational pursuits. A clinical professor was instrumental in teaching her techniques to get through nursing school with a family. “He also had a family while going through his ABSN program so he could relate to what I was going through,” said Hannah. “I wanted to excel but struggled with other responsibilities. I had to prioritize what was important. I was successful because he held me accountable.”

While Hannah admits there are times of stress and fatigue, the interactions she has with her patients makes it worth it. Especially one patient in particular who taught her the importance of mutual communication between nurse and patient. “When the other nurses gave me the report on my patient, they warned me she had been rude. Upon entering her room, I introduced myself and said good morning. She didn’t respond. I asked if I could help her with anything, still no response. All throughout the shift, I kept trying to make conversation with her and by the end of the day, she was one of my best patients. She told me she’d felt that no one had previously taken an interest in speaking with her, but I had.”

Unfortunately, not every clinical assignment has been a pleasant one for Hannah as she has experienced some prejudices during her clinical rotations. Due to her accent alone, one patient’s mother was not comfortable trusting her son’s care to Hannah and asked another nurse to have her reassigned. “It was an unpleasant experience and a complete shock to me. It was tough; not everyone will accept who you are, where you are from or what you look like.” Most often though, Hannah believes prejudices are found in what is not vocalized.  “It’s just a feeling you can’t pinpoint. Not being accepted because I’m considered kind of different, because of my accent or how I look can be hard.”

Having been through a number of tough situations in her lifetime, Hannah has chosen to view those challenges as opportunities that prepare her to become the woman she is growing into. With her bubbly and caring personality, Hannah has learned a healthy person is someone who is wholesome spiritually, physically and emotionally and has the ability to guard him or herself against negativity. “It’s difficult sometimes. You have to bless other people, even those who are ignorant or negative. If they try to bring you down, back away, remember who you are and be happy in yourself by striving to be the best person you can be.” When situations are hard, Hannah reminds herself to focus on what’s ahead rather than allowing other’s reactions to cause her to become bitter.

Throughout her nursing journey, Hannah has relied heavily on the support of her parents. Her mother, who lives with her in Columbus, helps with the children while she is in class and at clinicals.

Her father, who lives in Ghana, constantly reminds his daughter that she can do anything she puts her mind to. “Sometimes I really need to hear that from him. He is resilient and will always be there for his children. If I am able to parent with half the strength and grace he has, I will be a successful parent, the greatest mother. He is my rock.”

When it comes to improving and supporting diversity within the nursing profession, Hannah believes planting seeds in the minds of middle and high school students, especially those of underrepresented populations, would be most beneficial. “Introducing children to nurses who come from a similar background as they do right from the start helps students recognize there are countless opportunities waiting for them. Children need to know nursing is an option, especially nursing outside of the bedside.” Hannah would love to see a program developed where students have the opportunity to shadow nurses in different specialties. “Allowing students to build a relationship with nurses and learn why they chose the path they did and what their journey entailed could help to inspire younger people to consider a career in nursing.”

Thinking about her own nursing journey, Hannah hopes to encourage other underrepresented nurses and nursing students. “Never, ever, ever give up on your dreams. Sometimes it will be tough – it takes a lot out of you. You must keep your focus and never give up, regardless of whatever comes your way. Remain focused and you will go far.”

Looking to the future, Hannah hopes to secure a position in obstetrics or oncology at The Ohio State University Wexner Medical Center. A commute, she joked, that would be much closer than Cleveland! Additionally, she hopes to one day become a family nurse practitioner. “I like the idea of working with people across the lifespan, from babies to geriatrics. I’m excited about the future!”