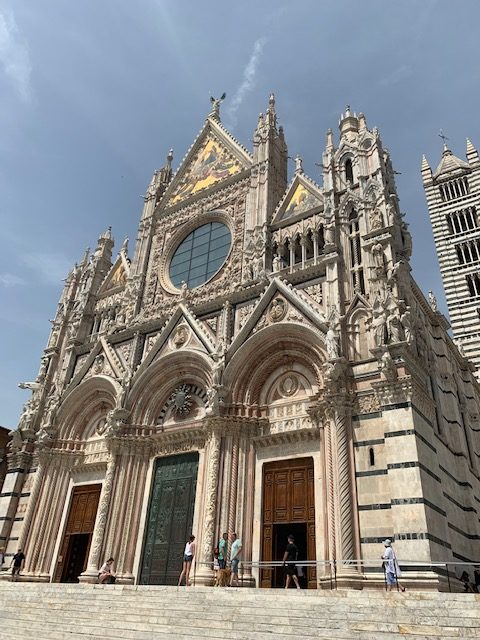 During our second week of classes, we took a field trip to Siena where we stopped at the VisMederi lab, the Duomo, and the Santa Maria Della Scala. At the lab, we heard two lectures, one from Professor Montomoli and another from Dr. Sindhiya Jan.

Professor Montomoli discussed the history of Siena, the impact of The Black Plague, and the Palio di Siena, a horse race held in July and August in the Piazza del Campo, the huge city center. In the center of the Piazza del Campo is the Torre del Mangia, an amazing tower built in the 1330-1340s. Dr. Sindhiya Jan spoke about the importance of vaccines and their progress in developing countries. She shared how diseases such as measles, which were nearly eradicated, are beginning to become more prevalent as people either refuse vaccines or still do not have access to them in developing countries.

While at the Santa Maria Della Scala, one of the oldest hospitals in Italy, we heard another presentation by Professor Ricciardelli who talked with us about the plague and how patients were treated at the hospital. He shared that in the 1300s, the hospital was actually considered a place of rest for the body and soul, rather than a place for treatment, which we found to be interesting. The Duomo (cathedral) located right across from the Santa Maria Della Scala remains unfinished to this day. While it was being built in the 1300s the plague invaded Siena, forcing all building to stop.

We’ve had a great time so far in Florence, and we have learned many new things from our field trips and lectures.